The Canadian Athletic Club announces the passing of George McKenzie.

It is with great sadness the family of George announce that he passed away peacefully, surrounded by his family on Jan.16th at the age of 71.  He is lovingly survived by Gloria, his wife of 50 years, daughters Kim Patten (Scott), Sheri Dallorto (Marc), Maria Thompson (Mike), and son Jordie (Jen);  grandchildren Makayla, Jordan, Tristan, Taisiya, Kaleah and Brooklynn. He also leaves behind his mother Peggy and brothers Rick, Alex (Wendy) and Tom (Karen); nieces Ashley (Myles), Melissa Lore (Mark) and Michelle Dykshoorn (Sam).  George is predeceased by his father William Doug Mckenzie.

He had a great love for Sports and in particular hockey, ringette, fastball and kayaking.  That love of sports led him to coaching.  He started his involvement with hockey teams as an equipment manager at the young age of 19, where he was mentored by many wonderful friends at the Candian Athletic Club.  He went on to serve in many roles with the club in his 52 years of service such as equipment manager, team manager, treasurer, ice allocator, alumni member and was club president from 1979 to 1984.  One of his highlights with the CAC was with the Butchers and Packers team, when they attended the Wrigley’s National Hockey tournament in Quebec in 1975.  When his son was a young hockey athlete, George had the privilege of coaching him with the White Mud West hockey association.  In 2007 George was honored for his contributions to hockey in Alberta with the Hockey Alberta Centennial Award.  He leaves as the proud grandpa of a current CAC hockey athlete. And will treasure the time spent working with his eldest daughter at the CAC who is now as passionate as he was about the Canadian Athletic Club.

George was a friend to all, a caring and loving husband, a wonderful father, and the best papa ever to his treasured grandchildren.  He was a coach and mentor to many, and a loyal friend always.

He will be missed and never forgotten

The family will be live streaming the funeral here:  https://youtube.com/channel/UC14j-tmVwCE0O8eS8GxJ1zA

In lieu of flowers, donations can be made to:

The Heart and Stroke Foundation

The Canadian Athletic Club announces the passing of George McKenzie.

We express our heartfelt and deepest condolences to the McKenzie family through this very difficult time.

George has given over 50 years of service, commitment, direction, inspiration and leadership to youth sport. The CAC has been very blessed to have George in our organization where George started helping hockey players with their equipment.

Long time friend of George and CAC member Dave Carlson states “that in all of my years as a member, I have not witnessed commitment and dedication to the CAC from past and present members to that of George, the CAC has lost a pillar and I have lost a dear friend”.

George has been a volunteer with the Canadian Athletic Club for over 50 years and even more amazing is the fact that George never had any of his children play for the CAC.

George was also an active Ringette member where he started his coaching career in 1987 lasting over 20 years. George led his AA team to nine Provincial championships, a national title in 1996 as well as four National silver Championships and one National Bronze. George also acted as the Ringette Western Division Commissioner from 2003 - 2007. In 2007 George became Ringette League President.

Long time member and Past - President Ed Tarksisof the CAC

Ed states” The World has lost a Wonderful Man. His contributions to the lives of so many people is truly immeasurable. Our thoughts go out to Gloria and his family”

Life - Member of the CAC and close friend to the McKenzie’s has shared the following poem by Robert Burns to reflect her thoughts on George.

The Friend Of Man,

The Friend of Truth,

The Friend Of Age,

And Guide Of Youth.

Few Heads With Knowledge So

If There’s Another World,

He Lives In Bliss;

If There Is None

He Made The Best Of This”.

Long time CAC member and past - president of the CAC Rick Beaumont shares his condolences to the McKenzie’s and states;

“Over the years George and I have served on many CAC related committees together. George was a leader, a listener and a mentor, but most importantly a friend who I respected greatly. Thank you for your commitment to the CAC. We will miss you George, may you rest in peace.”

Remembering George McKenzie - Mark Blair as a past - president of the Canadian Athletic Club.

“I am indebted to George for his candor, direction, and leadership. A dedicated and loyal volunteer, contributor, mentor, and most importantly BUILDER of the Canadian Athletic Club. George always worked and fought for what he believed was the best for the CAC, always putting the CAC first. So many of our long - time leaders have passed over the years but George’s passing will be felt for some time, leaving a legacy of achievement and volunteerism. From the burly red beaded manager/coach to the productive Board Member and President. RIP George, You will be missed.”

“I first had the pleasure of meeting George in 1974/75. He was the manager of the midget hockey team that I played on, Butchers and Packers. We had some great times, winning the City Championship and finishing as the runner up in the Provincials.

Once my hockey playing days were done and I needed a job, I called George to see if Edmonton Power was hiring and he checked with his manager and I was hired the next day. Thanks to George for getting me started on a 37-year career with the City of Edmonton.

I started coaching with the CAC in 1980 -81 and remember George as a positive influence in my early coaching days. Over the years with the CAC we had some great times. Hockey was only one of the benefits. I remember the year that the CAC annual golf tournament was held at the Stoney Plain Golf course. I awarded George the prize for the shortest drive off the 1st tee, a Frisbee. I said, you can probably throw the frisbee further than you can drive a ball. We all had a good laugh.

George was a tireless volunteer. When something needs doing George was always there to help.

Thank you George, for being a friend and a mentor, I will miss you.”

Vic refers to George as the “Gentle Giant” who was the guiding light to so many people. When Vic’s son made a CAC hockey team, Vic’s first encounter was with George as he was working with the team. In Vic’s words “George inspired me to get involved with the CAC and I have never looked back.” George and Vic have worked together on many projects together and Vic is most grateful for all George has done for the CAC and sports in general.

Longtime friend, life -member and Past President of the CAC Jack Laurie

Jack reflected on the high degree that George was respected no matter where he went. Jacks first exposure to George was when George joined the CAC and was the equipment manager of the Western Movers Jr. team. Jack also tells of the time he went to the Wrigley’s Tournament in Oshawa with George as the manager of the CAC Butcher and Packers midget team. Jack watched to see how everything went like clockwork and how George taught respect to all the young men on the teams involved.

As the current President of the CAC, the loss of George has had great impact on the CAC family, there has been an outpouring of kind and caring messages sent by those that have come to know George.

I met George during the summer of 1978 when I was working at an ALCB store run by a life member of the CAC, Paul Cote. Our job was stocking shelves and I was overwhelmed by Georges bigger than life exorbitance for his family and the CAC. I wanted to be better and George helped me through my life as an inspiration, mentor, ambassador, family man, and friend.

To Gloria, Kim, Sheri, Maria and Jordie, and extended family, we mourn with you on the loss of George. He will be missed and he will continue to remain as part of the legacy of the CAC. 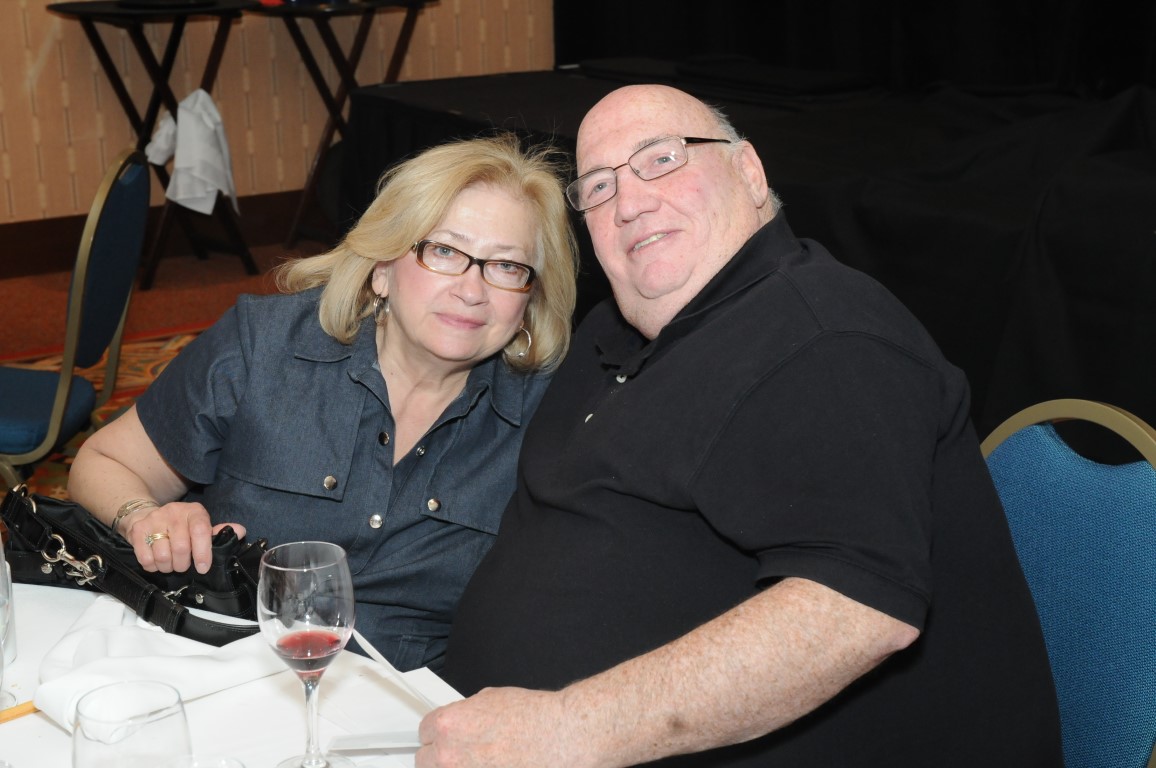 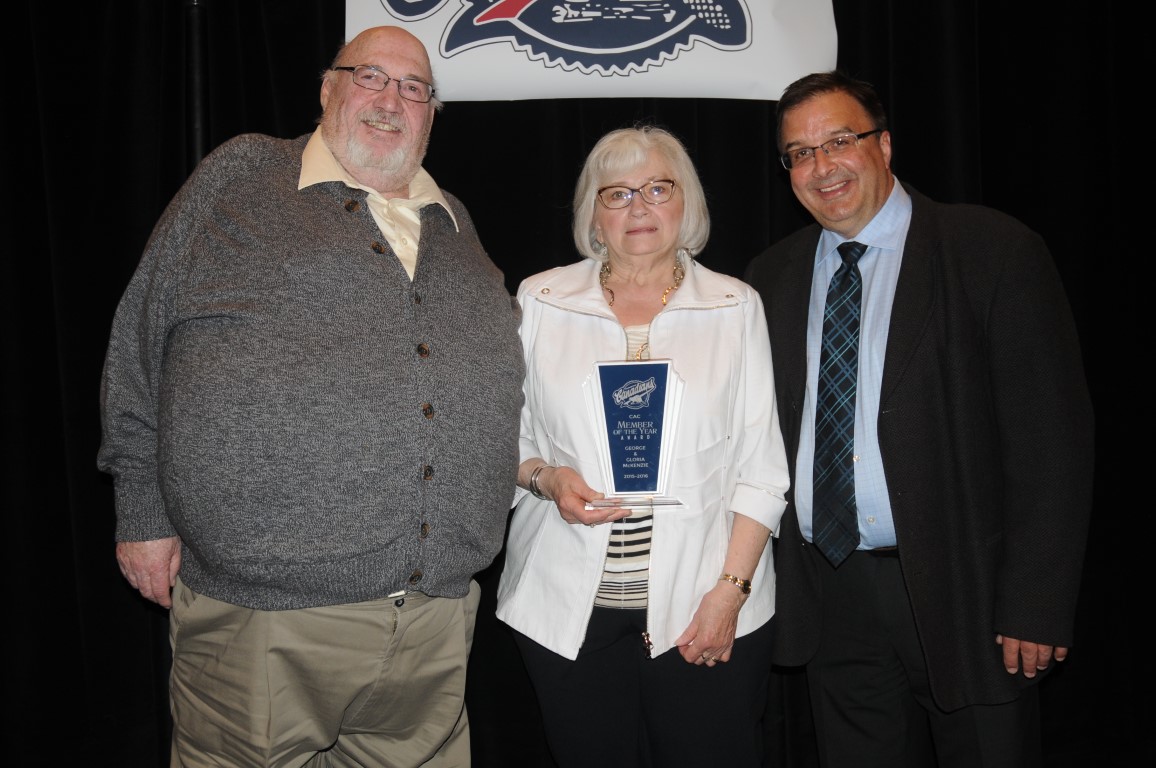 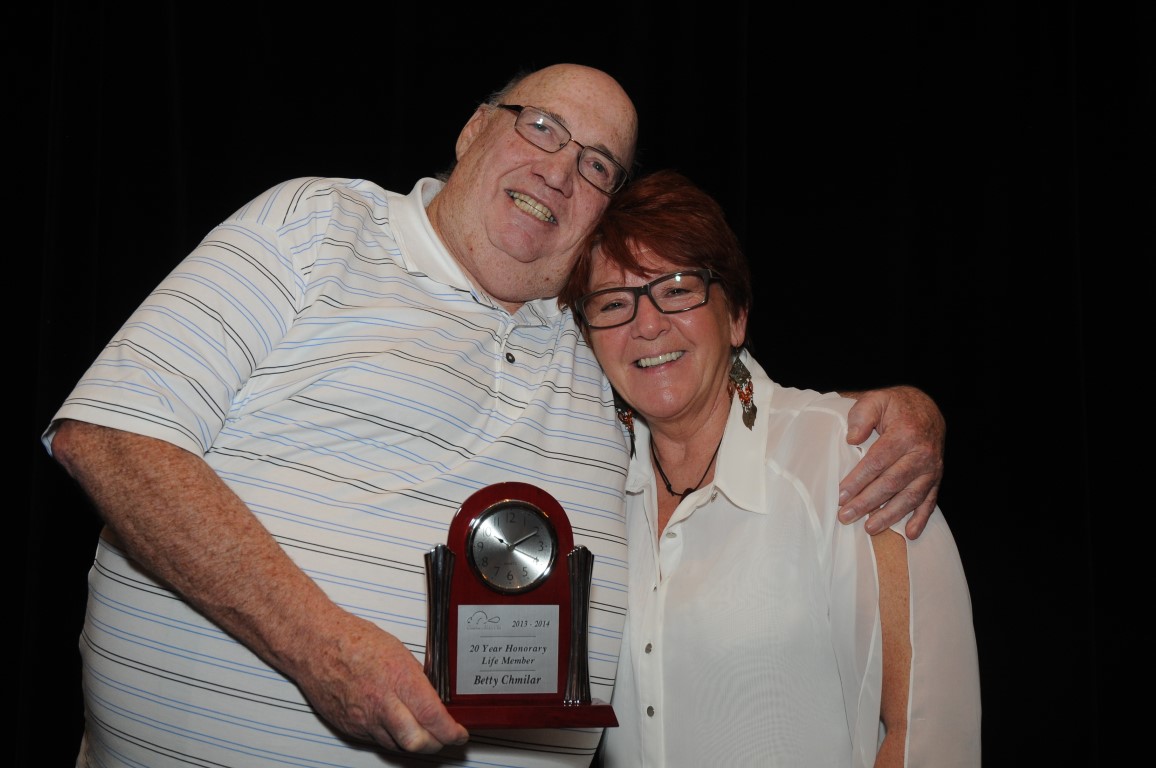 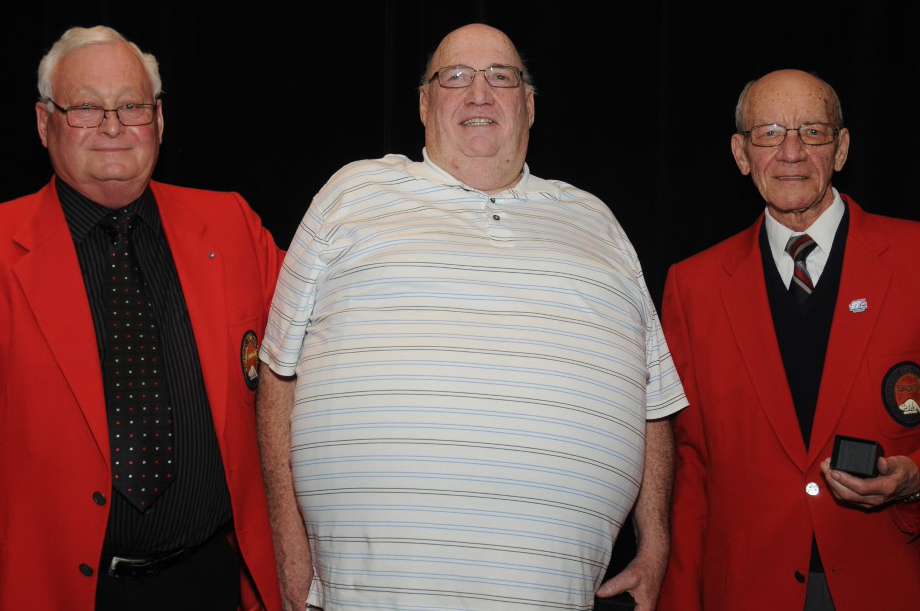 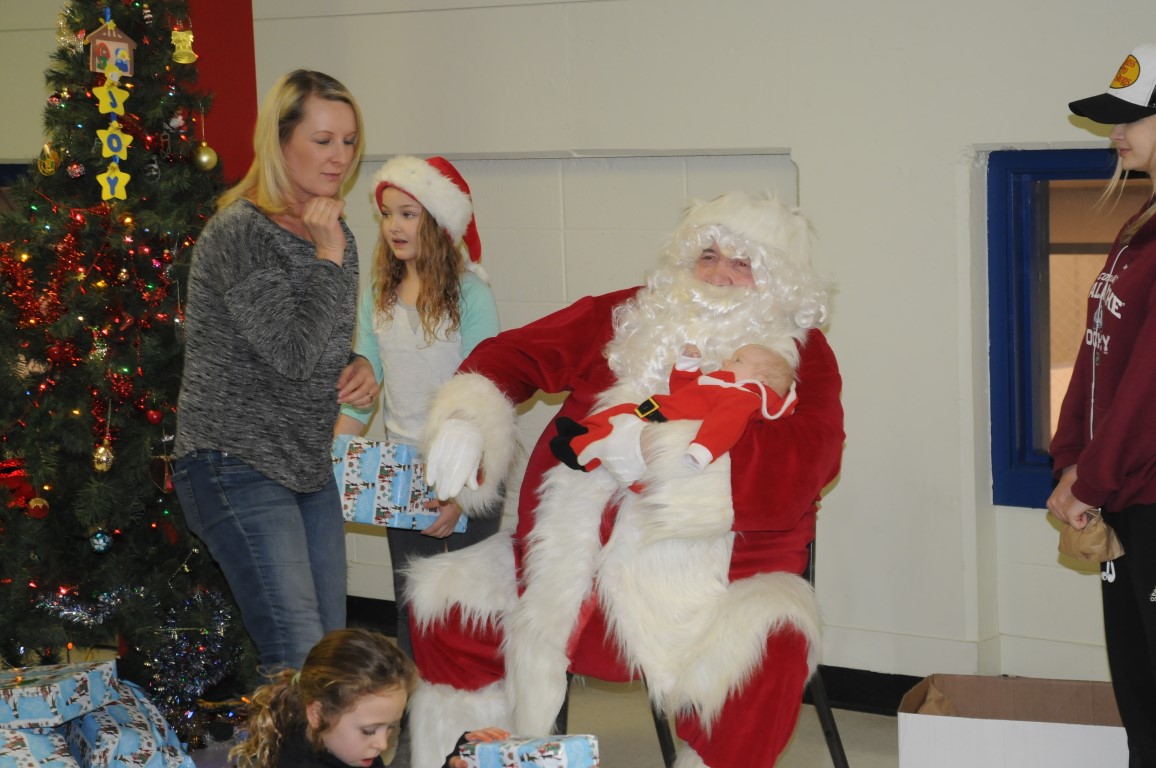 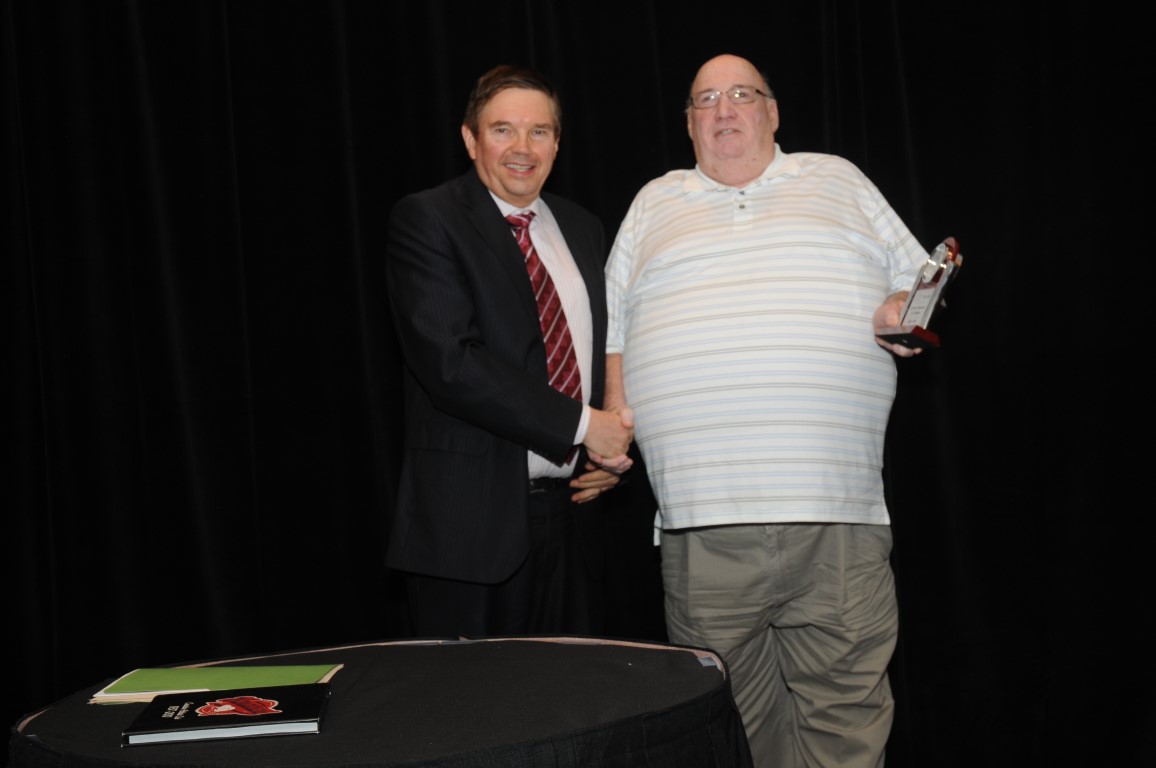